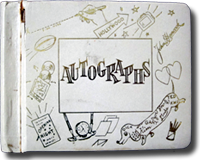 On Christmas Eve 1962, Margaret was a special guest on The Danny Thomas Show playing the part of a seasoned Brownie Scout leader in the rarely televised episode, Bunny The Brownie Leader. Bunny was played by series regular, Pat Carroll, and the two women were vying for leadership of Linda's (Angela Cartwright's) Brownie troupe.

On this show was a little girl, real name Sheri, who played "June", one of the Brownies. In real life, after filming was completed, Sheri went around the studio gathering autographs of all the people who either starred in the show or worked behind the scenes. This is that autograph book, now owned by MargaretHamilton.com.

Watch now
The book has been authenticated by PSA/DNA, and it was sent to Angela Cartwright in May 2018; Ms. Cartwright not only signed it again, but she wrote that she believed the book was authentic. Her real-life sister and actress, Veronica Cartwright, also viewed and signed the book. It's believed that Veronica was an uncredited Brownie in the 1962 episode. 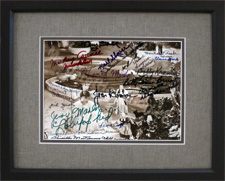 "When I began my search for the Munchkin actors in 1988, I discovered in obscurity (for the most part) thirty-three midget actors who worked in the classic MGM production of The Wizard of Oz. Additionally, there were seven child Munchkins surviving (young girls age 10 through 12) who appeared next to the little people in the scene, filling in for the female deficit. It had been fifty years since they all danced with Judy Garland on film, so I wasn't sure how many might still be around. I was lucky to have gone on that journey when I did and write the book, The Munchkins Remember (later revised as The Munchkins of Oz). I guess timing really is everything. It became one of my most prolific books, but it also provided me with a bundle of new friends who I'll never forget. 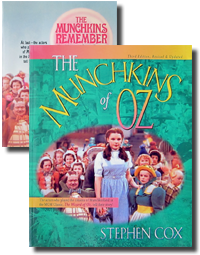 Each one of the little people and child Munchkins were unique and wonderful in their own way. And I was so fortunate to have had a nice relationship with them over the decades. During the 1990s and early 2000s, I attended quite a few Oz festivals, conventions, and personal appearances of the little people. I must admit, that I traveled mostly for selfish reasons—it gave me the opportunity to visit with the Munchkins, in private, and make some more memories. Each year, there were less and less of the little ones, and I never regretted even one visit with any of them. Some, like little Margaret Pellegrini, would insist I come to her hotel room after her full day of appearances and wind down with some hot coffee and a snack. I treasure those private visits where we would laugh out loud and recap the day.

Along the way, I was also blessed to have been able to acquire some rarities, like this signed photo. I didn't have many of these extraordinary pieces signed by so many of the Munchkins, but this is one of them, all autographed in person. This is history, right here on paper."

Note: The above was written exclusively for MargaretHamilton.com, which is the current owner of the autographed photo. In addition to the The Munchkins of Oz, Mr. Cox has authored several books on television and movie history, some of which are listed here. We sincerely appreciate his generous contribution to this web site and his unique, personal insights involving the Munchkins of Oz. Thank you, Stephen! 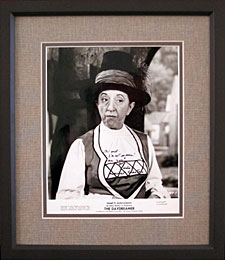 Here is a studio photograph of Maggie playing Mrs. Klopplebobbler, a very disagreeable woman who needed her shoes fixed in the movie The Daydreamer. You can see that she inscribed the photo in the bigger view, for a person in Canada whose name has been PS'd out. The signature is real and has been authenticated by PSA/DNA, one of the most reliable authentication services available.

Autographed items from Maggie tend to be in greater demand if they are Oz related, but not always. I especially liked this one because not only is The Daydreamer a wonderfully entertaining movie, it also co-stars her Oz buddy, Ray Bolger.

Maggie was a sport about signing photos for fans. She often signed them "WWW", "Maggie", her full name, or she omitted her name completely (those are difficult to have authenticated).

There are a lot more autographs out there than Hamilton actually signed—in other words, forgeries—some better than others, all worthless. Quite often, the seller swears they are legitimate or that they were friends with Maggie, all rubbish, all lies. These sellers, no matter how perfect their feedback, have no problem taking your money...and sometimes running.

Word of advice: If you are thinking of buying an autographed item of Maggie or any other celebrity, don't buy it unless it comes with a COA (Certificate of Authenticity) from a reputable service, such as PSA/DNA, OR, the seller agrees to pay expenses if the item doesn't pass authentication. Most COAs are not worth more than the paper they're printed on, and the vast majority of signed items on Ebay are fakes. If you buy an item, have it authenticated immediately...don't wait. 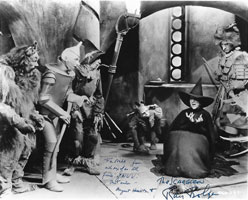 On the left is a photo with forged signatures that was peddled by an Ebayer who is still selling today (click the caption to see a close-up). Many years ago, he sold a ton of Oz-related and other photos, all inscribed to "Mike", mostly with fake Hamilton and Bolger autographs. I even saw one of his forgeries at a store in the Forum Shops in Las Vegas, priced in the hundreds. Mike (his real name) is out of New York and is a first-class liar...with a 100% feedback rating. 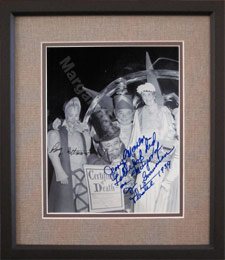 The person who obtained the autographs in the photo on the right was friends with the Munchkin on the left, Tommy Cottonaro, and Cottonaro was friends with Munchkin Jerry Maren, the Lollipop Kid. The photo was taken at the August 15, 1939, premiere of The Wizard of Oz. At the premiere, the film's real Munchkin Mayor, Charley Becker, was in Europe, so Maren donned the mayoral make-up and costume for the event.

Interestingly, this is the only event where Cottonaro is posed in the Munchkin make-up and costume worn in the movie. No production stills exist that show him in this attire.

Both autographs were obtained in 2000, but at separate locations. Cottonaro died in 2001; Maren was the last surviving Munchkin for many years, but died 24May2018 at age 98. 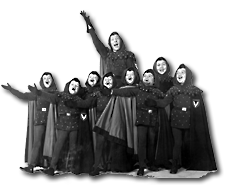 Cottonaro had a very diverse 15-year film career that began in 1939, and ended in the mid-1950s. In the '50s, he was part of the Hermine Midgets troupe, which originally came to the U.S. from Vienna.

The most famous movie featuring the Hermine Midgets was the 1955 Danny Kaye musical comedy, The Court Jester. Tommy Cottonaro was one of them.

Pictured at the left is Kaye with some of the Hermine Midgets; I'm not sure if Cottonaro is one of them shown (likely not, as he was taller than most of the other little people). He left show business after this movie was completed, went into a non-entertainment management position in New York, and did not participate in Oz-related conventions for the rest of his life. 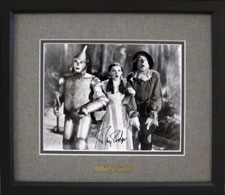 Bolger's autograph is quite common, but once again, there are a lot more autographs supposedly by him than really exist, and those are fakes. Unlike Hamilton, Bolger's signed Oz photos have a solid edge over his non-Oz signings.

If you purchase a Bolger-autographed item especially on the auction site, and the provenance would be iffy to a future buyer, get the item authenticated immediately. If it comes back a fake, you can file a claim against the seller and claw back your purchase price. You might be out of the authentication fee (it will cost you around $60.00 to authenticate an 8-by-10), but that's better than losing your purchase-price money and the fee.

If you purchase a forgery, after getting your money back, be sure to raise heck for the seller by using negative feedback, and file a complaint with the hosting website. Tell your credit-card company, too, if you have problems (American Express is especially good about intervening on your behalf). You can also file a complaint with the US Postal Service; they frown on people who use the mail system in order to commit fraud. The threat of a USPS complaint might be a good way to claw back your lost authentication costs. 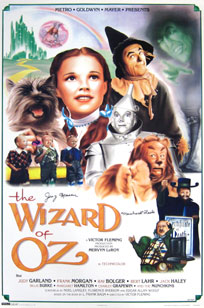 At left, a 1994 limited-edition poster signed by two Munchkins (Jerry Maren and Meinhardt Raabe). The two stars signed 3000 of these posters for the company, Totally Collectible. A number of these posters were contracted by Warner Brothers and offered for sale at its own online store (that's where I got mine). I believe the price back then was $75 each, via Warner Brothers.

The owner of Totally Collectible did indeed know the Munchkins, and the posters (both versions discussed here) are legitimate. For years, the last surviving Munchkin was Jerry Maren, but he died 24May2018. Because of his long life, and because he had signed so many different Oz memorabilia, the value of his autograph is diluted compared to other Munchkin autographs. 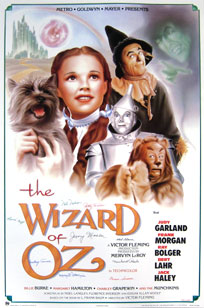