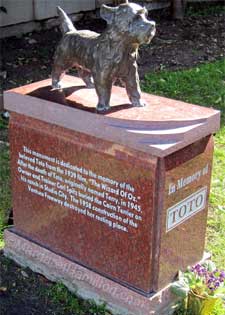 Bigger view ⇑
You can imagine my shock when visiting the Hollywood Forever Cemetary in Los Angeles and quite unexpectedly bumping into Toto's final resting place...not. No, it's not where Toto is buried (she is actually somewhere underneath the Ventura freeway...read the monument); it is merely a lovely and deserved dedication to a famous dog, and it's in a people cemetary. Still, I was moved.

This cemetary is loaded with stars (former stars?), and Toto's monument was placed right outside the imposing Cathedral Mausoleum, only a stone's throw from Hattie McDaniel's grave (you remember Mammy in Gone With the Wind, right?), dashing Tyrone Power, and lots of duck and goose crap, thanks to a rather "fowl" nearby pond. I kid you not: If you go there, bring an old pair of shoes or boots and a scraper because there isn't a clean spot anywhere on the lawns around these gravesites. 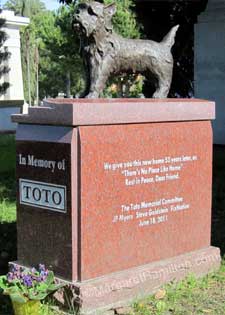 Bigger view ⇑
Inside the ice-cold mausoleum next to Toto's monument is a very touching space where Bewitched's David White ("Larry Tate") is interred. It's touching because White's son, Jonathan (1955-1988), is in the same space with his dad...he was killed in the 1988 Lockerbee Scotland terrorist bombing on a Pan Am plane. How sad is that? I did snap a photo, below...

TRIVIA: The bust of David White in his mausoleum space is actually a bronzed show prop from the 6 February 1969 airing of Bewitched: Samantha, the Sculptress.

In the same building, you will find several other spaces containing the remains of past celebrities...Eleanor Powell, Rudolfo Guglielmi Valentino, and Peter Finch. And outside, there's Mel Blanc, Jayne Mansfield, Don Adams, Darren Mcgavin, and even Mr. Blackwell. And THAT is just the tip of the iceberg. 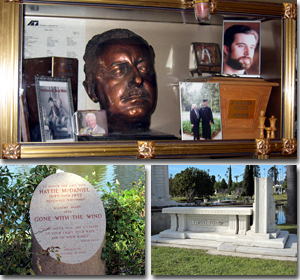 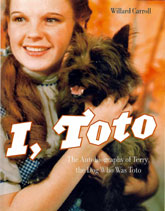 Willard Carroll's out-of-print book, I, Toto The Autobiography of Terry, the Dog Who Was Toto provides the complete story of Toto and her life. As you probably know by now, Toto started out as "Terry", a cairn terrior who, a few months into her life, became the property of her trainer, Carl Spitz. Born in 1933, Terry was not the perfect little girl...she had a house-breaking problem and later, according to Judy G, bad breath (want to bet it was people-food causing it?). Her original owners took her to Spitz's 10-acre dog-training school where she quickly learned that peeing outside was good. But her owners never reclaimed her, and she became an orphan...until the Spitzes decided to keep her as a pet, and groom her as a movie extra. 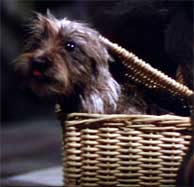 Terry had a great life at the Spitz facility, in a country setting with other canine pals and ultimately starred in several Hollywood movies. Terry auditioned for The Wizard of Oz, got the job immediately because of her instant rapport with all the leading actors, and earned $125/week on the picture, which was more than most of the Munchkins earned. And the rest is history.

Because everybody on the set of the Oz movie called the terrier Toto, Spitz renamed her after the movie was completed...mainly because Terry now responded to Toto, not Terry.

Sometime during the war years, Toto died and was buried in the back of the Spitz property. That property (12350 Riverside Drive, Los Angeles) was later torn down by the state and converted into the Ventura Freeway. The Hollywood Dog Training School, 10805 Vanowen St. North Hollywood, shut its doors forever on November 15, 2017 (owner retirement); its web presence is now gone. This facility was also the training grounds for Lassie, RinTinTin, and others.

Watch now
Here they are teaming up again in 1942, Margaret and Toto, in a screwball comedy called Twin Beds. Toto is "Poochie," once again a he not a she (Toto is asked if she found a new girlfriend...making her a lesbian?), and Margaret plays—what else?—a somewhat stern maid. There are only a couple of scenes where the famous duo are indeed in the same scene; in other scenes, it is apparent that their appearances "together" were actually filmed separately.

Margaret seems to have a cold indifference to Poochie, which is especially noticeable in the first scene on this clip. Perhaps it was an intentional inside joke, a throwback to the WWW's dislike of Dorothy's little dog. It wouldn't be the first time...see 13 Ghosts in Video Vault.