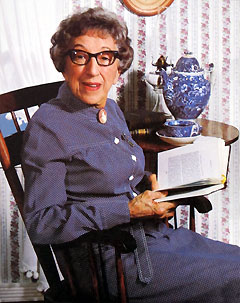 A New Lease on Career

Years after Hamilton's 1939 success as the Wicked Witch of the West, her career took another leap when she became spokeswoman for Maxwell House coffee in the 1970s. Her character's name was "Cora", a sharp, plain-speaking New England market keeper who was never at a loss for words...or coffee recommendations. Maxwell House was the only coffee she stocked in her store.

Just how many "Cora" commercials were broadcast is not known, but there were probably dozens. Thankfully, many if not most of them have survived in one form or another, mostly on studio tapes of vintage TV shows.

After the success of the Cora ads, Lucy's sidekick, Vivian Vance, also got into the act being the down-to-earth spokeswoman for Instant Maxwell House coffee. Cora's popularity, however, was the favorite when it came to selling coffee.

All of the videos on this page have been gathered from various sources, some having much better video/audio quality than others. They have been digitally enhanced, especially to remove noise and hiss from the audio tracks.

Watch now
Judging from the attire of this couple--her head-scarf ala Rhoda Morgenstern and his turtleneck--and Maggie's age, this is probably from the early- to mid-1970s. This ad, just like the phony ads of today, stereotypically portrays blacks as everyday clean-cut, squeaky clean, smiley dorks, just like their white counterpart dorks except for skin color. In its day, this ad would have been considered socially progressive...even if the guy's acting was more hammy than your breakfast bacon.

Watch now
Cora notices how Sara looks beat, so she offers her some instant coffee from the cleverly named space, "Cora's Coffee Counter". As you can tell, this is not one of my favorite Cora ads...I remember how fairly awful "instant" coffee tasted back in those days, and it was not nearly as dreamy and satisfying as lying Sara wants you to believe.

Watch now
Cora gets impatient with future detective (NYPD Blue) David Caruso in his dapper bib overalls, who must have been all of 21 years old in this ad.

The ads featuring Cora in her little country store with fellow New England types as customers were among my favorites.

Watch now
We're back in the inspiring "Cora's Coffee Counter" area of the store, this time with Audrey Landers before she became a regular on Dallas and many other TV shows. Like David Caruso above, "Sharon's" the same age, about 21, in this ad. And she adores that instant coffee, like beat Sara (also above) did...and we all know by now that Sara's word can't be trusted.

Watch now
This was my most recent Cora find, and it's in pretty good shape. It's also one of the earliest ads in the series. Cora makes sure the campers have all the supplies they'll need (thank goodness they remembered to bring their goofy hats).

Watch now
Cora has set up a refreshment stand at the auction, and it looks like she's also selling jams and jellies, along with cans of coffee...right next to her very retro station wagon. This is one of the better preserved videos in the series.

Watch now
Cora is closing up shop for the evening, after letting in the dog. She explains that there is only so much room in a country store, and one has to stock what's best: fruit in season, home-baked pies, and a certain brand of coffee.

Watch now
Uh-oh, something is different in this ad, broadcast in 1977... it's for instant coffee, the variety that Vivian Vance—instead of Maggie—later promoted. As you can see, Maggie has expanded her operation to now include "Cora's Coffee Counter" in her country store. And while the kids are standing by outside, waiting for Henry to have his coffee moment, one wonders why it wasn't "Cora's Soda Fountain".

Watch now
The entire country store is abuzz with a coffee tasting event, promoting "ADC" coffee, a marketing fad in the late 1970s, when there was an ADC (automatic drip coffee) grind for just about every coffee brand on the market.

Watch now
While everybody is distracted with talk about how super-markets have so many coffee-brand varieties, Cora secretly sets up a checkers massacre for unsuspecting Percy.

Watch now
A very young Judd Hirsch co-stars in this one. Up to about 1974, Hirsch's previous screen appearances were uncredited, so I'm guessing that this ad may have aired that year. His first credited role on TV was in the made-for-TV movie, The Law (1974).

The way Cora is eyeballing Judd in that photo, she apparently likes what she sees (CORA!).

Watch now
Cora helps the young couple with their party food supplies, but husband is worried about Jane's icky coffee ruining everything. You know, after watching a few of these ads, one wonders how the American public could buy into this lopsided sentiment, especially in the '70s when there was a strong awareness of changing roles.

Watch now
Mom was too lazy to buy her own coffee, so she sends her little ones to do it for her. And they end up buying the only brand that Cora sells, with the boy saying that his mom doesn't use THAT kind. Which begs the question of where mom usually shops for her inferior coffee...it certainly can't be Cora's store. Did Folgers' Mrs. Olson have a store, too? Actually, Cora's store was in reality "John Saunder's General Store," in North Stamford, Connecticut. Several of these ads were filmed there.

Watch now
This was a real surprise...in all my years of collecting these television commercials, I never noticed that there were two versions of this one. I've had both copies all along, and only noticed the variation prior to the launch of this site. The difference takes place right at the beginning. In the first version, the little woman shows disappointment and concern that her man doesn't like her coffee.

Watch now
However, in version 2, we see a playfully defiant, even impudent reaction from the woman as she belts her man after he had the nerve to say something negative about her coffee. With the clanging of the mobile hanging in the foreground, there is a cartoonish wife-hits-husband-with-frying-pan audio effect. Remember: It was the 1970s, and Helen Reddy was singing, I Am Woman on the radio. Not all women bought into the equality thing at the time. I suspect version 1 was shown in commonly conservative areas, and version 2 was shown out west. Just a guess, but it sure does provide a historical perspective of the times back then.

Watch now
I'm not sure when Cora's commercials ended, but this one seems like one of the last, broadcast in 1978. Cora is helping with the perfect dinner that includes sirloin, Idahos, and Emma's pie.

Watch now
Looks like the honeymoon might be over before it begins for these newlyweds. He does not like whole-wheat bread. Then again, maybe the "just married" part was between him and his inflated ego. Even in the 1970s, this sentiment was not widely embraced...not the best written script for the day, that's for sure.