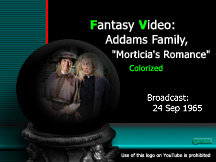 Note: The clips on this page usually have nothing to do with Maggie or The Wizard of Oz.

A fantasy video could also be one in which I've taken the musical soundtrack, only ever recorded in mono, and used sophisticated software to isolate voices and instruments to create a "true" (but fake) stereo version. The Hertz commercial on this page is an example that turned out fairly well; the Juicy Fruit Gum commercial is a very mediocre example.

So there you have it: A fantasy video is like a this-is-how-it-coulda-been-done video or broadcast. Any time I've done this to a video, you'll see it marked as such in the description below and in the video's opening. Please do not post these videos anywhere, especially YouTube, or monitize them in any way. I do monitor this and will act accordingly.

Watch now
This video is 3 minutes, 20 seconds in length. I created it for one of my old websites several years ago. It has been upgraded with new audio.

In his day, back in the late 1950s and into the 1960s, everybody knew William Talman as the loser attorney on the TV show, Perry Mason. Both Talman and his third wife had their share of unwanted publicity back in the early '60s (you can look that one up yourself...it's kind of funny to me nowadays, especially since pot is legal where I live). Shortly after the show ended, Talman was diagnosed with lung cancer. He knew he didn't have long to live, and he wanted to make an anti-smoking television commercial, warning people that this could happen to them. He got his last wish, and he made the very first such PSA (Public Service Announcement) for broadcast.

This ad is impossible to find in mint condition; most of the copies available are discolored with age, losing their true colors. The copy I have was found many years ago on a VHS tape; its colors are still fairly well-preserved. Here is the PSA, presented in its entirety, at the end of the commentary.

Watch now
Back in 1969, when Mancini released his version of the Love Theme, it not only zoomed to the top of pop charts, it became an enduring favorite. Oddly, there are few videos on the web showing Mancini playing this song, except for this one, which was never released on home video. It was broadcast on Julie Andrews' last show of the short-lived Julie Andrews Hour.

In this video, the mono soundtrack has been replaced with the stereo version. It is exactly sync'd with the video footage, so if it appears that Mancini is not aligned with his music, I have no explanation. This video was sourced from somebody who had access to professional recording equipment the evening it aired, back in 1973. What you see is about as good as over-the-air TV got back in those days. That's Julie, sitting in the background.

Watch now
Many people remember the catchy tune in the old Hertz rental-car commercials, with the guy descending into the car from above...let Hertz put YOU in the driver's seat...

There is an extended recording-studio scene of the making of this commercial in the motion picture, Good Neighbor Sam, and it features the sensational Hi-Lo's singing their famous jingle...in mono, not stereo.

I've taken that footage, diced and spliced it, converted the mono track into a "true" (but fake) stereo track, and put them all together. The video includes before and after versions...the black-and-white "before" video is just for effect, to enhance the experience. The end result is pretty cool...and it took what seemed like 152 years to create. Wear headphones. Please don't: Placement of this video and audio on YouTube (or any other site) is not allowed.

Watch now
Hullabaloo was a short-lived 1960s TV show for the younger generation. In its day, it was must-see television for teens and young adults.

Most people don't know that master copies of this show are long gone; ALL color shows except a handful are gone, and remaining shows are black-and-white kinescopes...most are poor quality. Both of the videos presented here are best-available color copies, and true stereo soundtracks have been added. Additionally, bass wav forms were isolated and enhanced, to give a richer experience (it's expecially noticeable in the Winters clip). In the opening show clip, the announcer's voice was extracted from the mono audio track and added to the stereo version. Wear headphones!

Watch now
The same was done for this David Winters clip. David was the choreographer for the show (he died 23 April 2019, age 80). Legendary Peter Matz and his orchestra provided the music. Winters' moves are incredibly precise and physically exhausting to watch; the background dancers are exceptional. I thought that the end result of this clip was amazing. Crank it up, and wear headphones! Please don't: Placement of these videos and audio on YouTube (or any other site) is not allowed.

Watch now
Cute television ad that was broadcast in the United Kingdom several years ago, by Orange, a cellphone company. The Wicked Witch of the West and her friend, Vicki, participate in a two-for-one movie theater offer sponsored by Orange.

When you see the WWW (apparently named Phyl) pal'ing around with her buddy, nonchalantly trying to do stuff together with the rest of society, it's just funny. Rachel, who plays the part of the witch, certainly looks and sounds the part.

There are several favorite bits in this clever ad, but I like the brief appearance of Toto...I'll bet many viewers missed the fleeting homage.

Watch now
Very rare television commercial from the mid-1970s. Although there were several variations of the Juicy Fruit Tree theme, I have been unable to locate this particular version anywhere on the web. My copy is a muddled-sounding, poor quality clip I found on a very old VHS tape decades ago. Other, better-quality variations of this theme have dated disco-sounding music...and worse.

The catchy tune in this ad got my attention when I first heard it. I attempted to convert it from mono to stereo, but the results are mediocre...disappointing, really. However, there is a general improvement in audio quality and a general separation of some sounds. It is impossible to have a success story like this when the source material is so poor to begin with. I tried. Please don't: Placement of this video and audio on YouTube (or any other site) is not allowed.